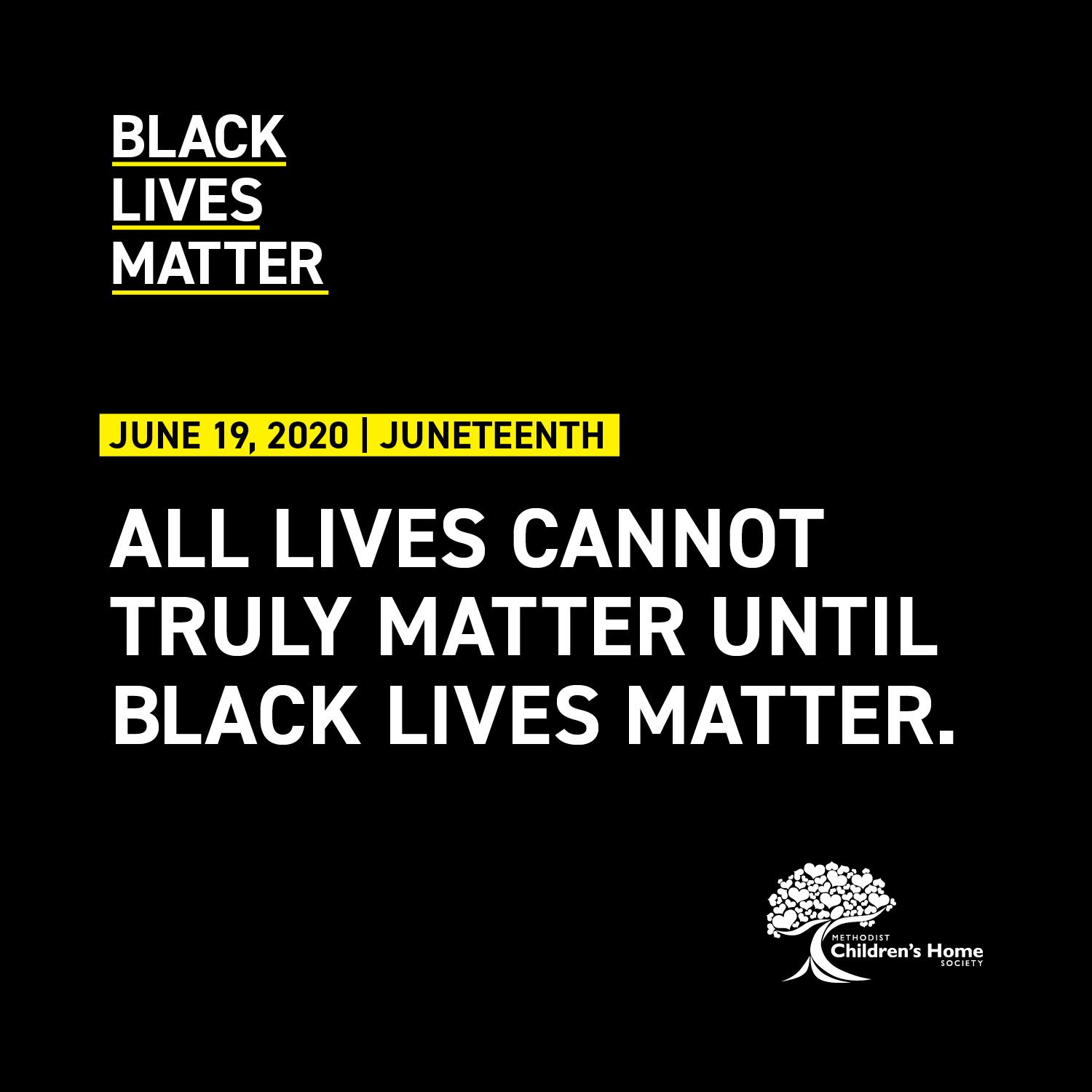 Why are we so threatened with Black Lives Matter? Why do we instantly rush to say that All Lives Matter? It is as if the moment someone speaks those three words, one’s perceived self-worth becomes threatened. And as a result, it becomes an “us versus them” summation, as if to remind the person who utters those words that no life is valued over another.

Why do Black Lives Matter? Because for 400 years, from when the first slaves were brought to America’s shores, Black lives did not matter. Because Black people have been slaves for longer on this land than they have not been. Because 12.5 million people were kidnapped from Africa and sent to the Americas as slaves. Because we have people walking amongst us now who are just a couple generations removed from being born into slavery or being slave owners. And the last person who came by way of a slave ship to our country, Matilda Maccrear, was alive at the same time my parents were. We’re not talking ancient history.

Because for a good part of our country’s existence, the value of a Black people was set at just three fifths of a free person, just a margin more valuable than a half person. And that attitude lived right past the Civil War into the Jim Crow era where separate but equal reverberated through all our country’s institutions to ensure the disenfranchisement of African Americans. It’s not ancient history when one-third of our country was alive at a time when racial segregation was legal.

Why do Black Lives Matter? Because when our country won its freedom, Black people did not. And they are constantly reminded of the bloodiest war our country ever fought was a battle of values and whose life mattered. How does our country still have 775 monuments and another 1,100 confederate symbols in our country? How did it take NASCAR nearly 160 years to finally understand what the Confederate flag represented? How can you consider yourself to be nonracist, but honor the losing side of the Civil War, which fought for slavery? How does our U.S. Capitol have 12 statues of confederate soldiers but only four of African Americans? Black Americans are reminded every day that many Americans still honor and justify the Confederacy’s fight against their freedom. Is this the past we want to guide our future?

To say All Lives Matter is to ignore reality. It’s to deny the deep and pervasive experience that so many Americans continue to face based on the color of their skin. Whether it’s buying a new shirt, being pulled over by the police, being denied a loan, or receiving substandard education due to their skin color, it’s easier to find fault in the individual than find fault in the system.

It’s easier to hide behind language such as “I’m colorblind” than to actually do anything about it. It’s easier to shout “All Lives Matter” because then nothing is required of you. It’s easier to claim “I wasn’t a slave owner” so you’re freed from feeling the pain and burden of the past. It’s easier to raise arguments such as blaming Black on Black crime as if police brutality wouldn’t occur if Black people didn’t commit crimes (as well as implying white people somehow do not). And it’s easier to say “All we need is love” as opposed to feeling empathy or taking the time to listen to the experiences of others.

Or maybe to say those three words would be to accept that there are Americans who have different benefits and opportunities and are forced to play by different set of rules than the majority of Americans. To say Black Lives Matters means to accept our white privilege. To have white privilege means that many of us have never had to think about where our hands are when pulled over by the police for a common traffic violation. Or automatically presumed guilty because of our race. Or having our skin color used against us all the time. Or not being given the benefit of the doubt. Or having to talk to your children about why society won’t trust you. Or having someone like a Candace Owen amplified by white people to justify how Black people brought racism on to themselves.

Or being fearful any police officer might kneel on your son’s or brother’s neck for nearly nine minutes until every.last.breath.was.squeezed.out.

To say Black Lives Matters means to acknowledge there is still work to be done. That George Floyd’s life mattered. As did Rayshard Brooks. And Ahmaud Arbery. And Breonna Taylor. And Freddie Gray. And so too did the lives of Walter Scott, Tamir Rice, Akai Gurley, Laquan McDonald, Michael Brown, John Crawford III, Rekia Boyd, Oscar Grant, Sean Bell, Jonathan Ferrell, Michael Stewart, Greg Gunn, and Clifford Glover matter. And Trayvon Martin, Sandra Bland, and Eric Gardner. And Cornelius Frederick. And too many others to fill pages upon pages. All within the last several years. It is nauseating.

At MCHS, we will be part of the solutions moving forward. We’re committed because all of us need this. We don’t have all the answers, but we’re ready to engage and do our part, finding other allies in moving forward with action and purpose.

From his Birmingham jail cell in 1963 in which he was arrested for peacefully protesting, Dr. Martin Luther King Jr. wrote, “When you have seen hate filled policemen curse, kick, brutalize, and even kill your Black brothers and sisters with impunity. . .then you will understand why we find it difficult to wait.”

Five years later in 1968, under the direction of President Johnson, the Kerner Commission found it wasn’t Black anger that caused the civil unrest, but White racism. Their final conclusion was, “Our nation is moving toward two societies, one Black, one white—separate and unequal.”

Until Black Lives Matters, we’ll continue waiting for a just and equal society. That’s why it matters so much.